I thrive on the thrill of certainty.

Next week, however, I’ll embark on a big journey defined by uncertainty.

I’m traveling to Turkey Jan. 9-24 to learn about an unfamiliar culture on a new continent, and I’m uncertain what to expect. And weirdly enough, I’m fine with that (All right, I will be fine with it after I devour another piece of caramel cake).

When I wander the Grand Bazaar in Istanbul, tour the Virgin Mary House in Izmir and try new food, I vow to let the uncertainty linger. While I get a thrill from confirming the amount of water in a top-notch cake recipe, I’m determined to realize the value in uncertainty.

I’m uncertain what that value will be for me, but I think I’ll begin the journey today, from my kitchen in Iowa: I’ll bake my beloved caramel cake recipe from memory.

I hate to open my post with the quintessential Thanksgiving line, but I have a lot for which to be thankful.

Rather than ramble about my love of chocolate chip cookie dough ice cream or One Direction, though, I narrowed my reflection to journalism and specifically, what I’m thankful for in the media world.

First, I’m thankful stories change. Nearly a month ago, I embarked on a project about the alleged nationwide shortage of farm veterinarians. A lot of research and one interview later, however, I realized that wasn’t the story at all.

In fact, there wasn’t a shortage of farm vets but a surplus. There are plenty of farm vets, but they’re not in the right places. While I had to abandon my initial plan, the real story proved far more intriguing — and troubling — than the preconceived one.

So, I’m thankful stories change. I’m thankful I’m in a field where unpredictability is a mainstay. Finally, I’m thankful I had the chance to challenge and hone my ability to be flexible. To let my sources and research — not my original idea or a naive preconception — guide my reporting and writing.

I’m also thankful for The Times-Delphic staff. I know I gushed about them in a recent TD column, but they’re my anchors amid the crazy, whiplash-worthy workload of an editor-in-chief. And they deserve an extra helping of recognition.

Though I swear all 13 editors conspire to bombard me with questions at the same time, they motivate me to serve the readers in every word I write, edit and print.

Finally, I’m thankful I have the opportunity to enter and experience a variety of worlds as a journalist.

I recently entered the realm of costume play, cosplay for short. Yeah, me: “Star Wars” and comic book newbie and lifelong costume cynic.

Though I inadvertently asked a “Star Wars” cosplayer to explain his “Star Trek” outfit (the capital sin in comic con world) at my first comic book convention, I realized the richness in a new culture and ultimately, a new frame of mind.

Finally, I’m thankful I work in the world of sharing stories. When I’m embroiled in the chaotic grind of back-to-back interviews, multiple deadlines and frantic AP Stylebook searches, I often neglect the thing I’m most thankful for as a journalist: I spend every day rapt in the sometimes-hectic, sometimes-complicated — but always beautiful — human experience. 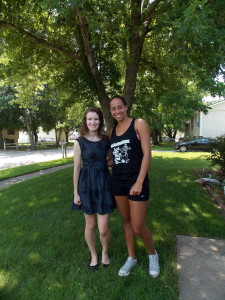 One word describes my time in The Observer newsroom this summer: unexpected.

When I unpacked my AP Stylebook, notepad, click erasers and voice recorder into my blindingly teal desk June 3, I never expected to hunt mushrooms or paint barn quilts — at work.

Most of all, though, I never expected to meet and interview a professional tennis player in DeWitt, Iowa.

I’ve loved tennis since I picked up a racket at 15, and I usually gush about Swiss icon Roger Federer just 10-15 minutes into a chat with someone new. When my managing editor assigned me a feature piece about 18-year-old American pro Madison Keys, who has family in town, I was elated.

As I watched Keys play in the third round of Wimbledon on my laptop, I couldn’t believe I’d meet her in a few days.

As she pounded groundstrokes over the net, I scribbled pages of notes about her — her career record (84-48), her favorite player growing up (Belgium’s Kim Clijsters), her world ranking (No. 52, as of July 7).

Finally, I wrote the kind of questions I before had only dreamed of writing — questions about net play, the demands of the Women’s Tennis Association tour, match superstitions and slice shots.

Despite my meticulous preparation, I walked to Keys’ aunt’s house slowly on Friday, at once timid and eager.

Her warm smile instantly eased any qualms I had, and I couldn’t stop smiling as we delved into the world of aces, rankings, rackets and Grand Slams.

Writing about Madison Keys cemented my goal to work as a tennis writer someday. While I’ll never reach her level in my own game or lace my sneakers at Wimbledon, I get a thrill when I write about tennis.

When I write about tennis, my MacBook Pro is my own Centre Court at Wimbledon — and I always win.