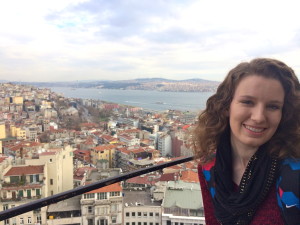 Specific dates zigzag through my mind, darting in and out of memories that organically pop up during any given day. April 16, my senior Prom. December 13, my Drake graduation. January 19, the first day of my first big-kid job. October 18, my first half-marathon. Friends’ and family members’ birthdays. I like how defined they are; each one apportioned 24 hours, it begins and ends. This is an obvious fact, of course, yet I seek refuge in its tangibility and envy the concrete hours, minutes and seconds that add up to one day.

It is the feelings and fears that linger long after the seconds have ticked away, embedding specific dates in my mind. Today is one such date, January 23, one I ruminated on for more than a year before lumbering into an ongoing stage of reflection.  END_OF_DOCUMENT_TOKEN_TO_BE_REPLACED

I call them life decisions but at first they are often distractions, pretty, shiny fodder for my next, “What’s new with you?” encounter. Taking Arabic, running the half-marathon, going vegetarian, returning to the tennis court: They all started as distractions from something and somehow morphed into interests, even habits. I’ve been reflecting lately on the progression from disappointment to distraction to finally, the natural healing that yields both a new passion and a form of release.

Earlier this month, I felt deep disappointment over something that didn’t work out as I had hoped it would, felled by incongruent goals and expectations. Then, it was a health scare. All the while, I have been conscious of my inevitable attempt at healing disguised as a cool, new goal.

But this time, rather than throwing myself wholeheartedly into something I can tell all my friends about, I’m running because it’s therapeutic. I’m eating vegetarian because it’s helps the environment. I’m practicing Arabic because I want my vocabulary to be better than that of a well-spoken 2-year-old. I’m playing tennis again because it’s a lifelong sport that taught me discipline as a teenager. I’m writing about distraction rather than indulging it.

Maybe I am entering into an era in which distraction and decision are independent, one in which I’m aware of my motivations and am careful to balance busying my mind and working toward something new.

Writing is both a distraction and a decision for me, as it encompasses every stage of the healing process. It reminds me that healing doesn’t exist in a new goal but what I allow that goal to become.

I painted my nails black then registered for the LSAT, capping a turbulent week with something I exclusively can control. I haven’t painted my nails since my senior Prom, nor have I ever painted them black (don’t tell my mother), but something about making a major decision like law school led me to a wannabe-rebellious color choice. I removed the black pretty quickly, but damn, it felt good to make such a daring choice to go with another relatively daring choice.

2016, clearly, has already been an interesting year for me.

This week, I gained more control at work when my boss officially handed off the museum’s Facebook account to me, then lost it when a health scare landed me in the hospital, revealing that I’ve been sick for several months and didn’t know it. I gained control when I registered for the LSAT in June and lost it when a would-be relationship didn’t work out as I had hoped it would, leaving me feeling unwanted and inadequate.

Control is tricky like that, the way it cruelly instills false confidence, false hope, only to sneak in and remind me I’ll never have it all completely figured out — and that’s fine, by the way.

For a long time, I perceived dating as something I could control. If I’m smart enough, cool enough, charming enough, driven enough, it’ll work out, I told myself. And when it inevitably didn’t, I felt it was solely my fault, that I simply wasn’t good enough. The adult reality of different expectations, timelines and goals escaped me. They’re out of my control, a menacing, unpredictable realm that led me to intense self-loathing and nagging doubt (again, something I could control and ultimately dish out in a destructive capacity).

I faced literal inadequacy this weekend when I learned my blood isn’t properly nourishing my body. I arrived at the hospital with a hemoglobin level of 5, when 12 is normal, and am dangerously low in iron. It is a bizarre juxtaposition, really. I sought desperately to control a would-be relationship but couldn’t ultimately control my own health.

It’s Jan. 11, and this year has already left me feeling empowered and powerless. In tune with my career path, out of tune with my health. A success in my professional life, an unattractive failure in my personal life. Running two half-marathons, owning the LSAT, applying to law school — those were the New Year’s resolutions I had planned to tout in 2016. Instead, I’ve shifted to a list that’s more modest, less flashy but, I’ve realized, equally as important: Take my new medication daily, be a little bit kinder to myself and remember that I can’t control everything — and there’s something beautiful about it.