Place is peculiar. Where we are shapes who we are. Changes in location brew in me a mild feeling of panic; when the physical environment shifts dramatically, I’m forced to confront the more existential shifts in my life. After visiting Turkey in January, I find I’m more cognizant of place’s role in my evolving identity.

I was born in Minnesota and grew up in Iowa. Occasionally I feel I have to declare one and renounce the other.

Yet that’s the beautiful thing about place. Each physical space in which I exist weaves its way through my life in unexpected, productively jarring ways. 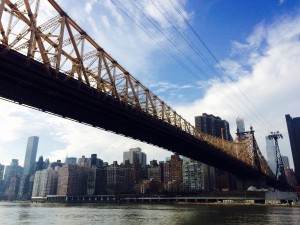 My family and I returned today from a four-day vacation in New York City, a world far different from Iowa — land of the nod and two-finger wave when you drive by, well, everyone. It’s when we realize where were not meant to be that we become aware of where we are meant to be.

As I craned my neck to catch the tops of buildings towering above, I realized the density of NYC left me feeling emptied, exhausted. I craved space to breathe, a moment free of blaring taxi horns and the pretense of another curt “Excuse me.”

Place has a way of naturally and organically revealing what matters to me. I write to capture my identity as it exists suspended in specific places and times and more importantly, to work through the turbulence of 20-something life.

I travel not to find the iconic landmark or like-worthy “Look where I am!” selfie but to find the vulnerability place inevitably provides. When I travel, I let place make me feel uncomfortable, uncertain, unmoored, and somewhere amid all that un-everything, I gain a stronger sense of where — and who — I am.

There are many things I don’t know. Where I’ll be working or living next month (well, I hope by next month, anyway). Why I can’t remember which section of Des Moines’ skywalk system is closed even though I trek through it four times a week. I don’t even know how to say, “I don’t know,” in Arabic (something that’s more useful than, say, my knowledge of the word for “peach”).

Amid all my post-grad angst and uncertainty, I find unexpected comfort in the things I know — the cerebral and the tangible. Moment to moment, I flip from extreme confidence to paralyzing fear. I capture the whole experience in writing, whether in my journal, here on my blog or on Twitter. There’s something intoxicating, dizzying, about capturing my identity as it exists, suspended in a single moment and mind — knowing I’ll never be there again.

For now, I’ll take a brief break from my uncertainties (for the next 300-some words, that is) and write about the things I know, some more existential than others.

I know all the words to the “Fresh Prince of Bel-Air” theme song, and I’m not talking about the mainstream version. I can rap the extended version, including the verse about sipping orange juice out of a champagne glass. “Ice Ice Baby” is next on my list, and I’ve already got the, “Yo, VIP, let’s kick it,” part down.

I know I’ll probably never be fluent in Arabic, but I’m going to keep learning it.

Thanks to Amy Poehler and her brilliant memoir, Yes Please, I know saying “no” should be the end of discussion, not the start of negotiation.

Fun fact: I know all the words to Kevin Gnapoor’s rap from “Mean Girls.” Whenever I need a pep talk, I turn to my favorite line: “All you sucka emcees ain’t got nothin’ on me, on my grades, on my lines. You can’t touch Kevin G.”

I know I don’t have to have my life figured out right now.

I’ve been writing thank-you cards for three straight days, per my recent birthday (for the record, I am still not sure if I’m “feelin’ 22”) and college graduation. I even contemplated writing them in Arabic, but that plan derailed when I realized I don’t know the word “for.” When I wrote my typical color-coded thank-you card list, I forgot one recipient, both friend and foe. A frenemy, if you will: the year 2014.

Thank you for writer-ly failure.

The idea looked promising enough: issue-focused, in-depth and relevant to the reader. When I put it together, though, the story simply didn’t work. I interviewed more sources, gathered more information, worked and reworked my intro — still, nothing.

Not every piece of writing will work right away, and some, quite frankly, will never work. That’s fine.

Thank you for Arabic grammar.

Here’s my experience of learning Arabic in one sentence: “Here are the rules, but don’t follow them because everything is irregular.” While it takes me nearly five minutes to write the sentence, “Hi, my name is Taylor Soule, and I am from Newton, Iowa,” and while I still can’t hear the difference among the three “th”-like letters in the alphabet, Arabic reminds me to laugh at myself. Often.

After all, it’s tough to feel serious when, “Do you have a large dog or a small dog?” is one of the more deep and meaningful questions in my repertoire.

Thank you for green bean casserole.

I actually hate green bean casserole, but I’m thankful to 2014 for my app development experience. In the course of five months, I worked as user experience designer and project manager for three apps: an event calendar app, an audio Mad Libs app for 4- to 6-year olds and finally, a Midwestern recipe app (hence the casserole nod).

Each provided a new user base and more importantly, new niches and voices with which to experiment. I wrote event descriptions, mildly nonsensical five-sentence stories for children and expressed my so-called ‘love’ of bacon.

While I’m glad Googling “tater-tot hotdish” is no longer an integral part of my daily routine, I’m thankful my software development adventure provided a variety of new challenges and niches.

So, 2014, thanks for bad writing. Thanks for illogical grammar and letters that sound exactly the same in my English-speaking mind. Thanks for green bean casserole meatballs (they’re a real thing, I swear) and beer-candied bacon. Well, the recipes, anyway.

I’ve learned more this year than any other. Maasalaama, 2014 (that means goodbye in Arabic).

Between learning Arabic, fearing/eagerly awaiting the ‘real world’ and writing my 40-page thesis on pro tennis players’ memoirs, my final semester provided plenty of blog fodder. When I completed my final undergraduate obligation today (beyond wearing that ugly gradation cap this weekend), I didn’t know what to say.

I’m not one for grand nuggets of ‘wisdom’ fit for some teenage girl’s Twitter bio. It’s been a mismatched, odd semester, which unexpectedly led me to an idea for my blog. Rather than feign some, “I found myself in college,” rubbish, I compiled a few excerpts of my life-writing endeavors from the last seven semesters, ending with a longer excerpt from my senior thesis project, “Tap.”

I believe writing is a direct reflection of the self as it once existed, suspended in a particular moment in time. As graduation nears, as I both welcome and fret a new “stage” of my life, there’s something particularly natural about the act of reflecting, reminiscing. It’s too easy to craft some syrupy Facebook post about the “bittersweet” experience of leaving the campus community — and fear not, I won’t post a #ThrowbackThursday photo of my move-in day adventures.

I’m into the darker, more violent elements of writing: extracting tangible bits and pieces of me from their computer-archived safe havens, each comfortably nestled in one distinct moment.

Spring 2012 (apparently, I was at the pinnacle of my em-dash phase at the time of this piece): Therapeutic texts push readers — like writers — into tender territory, again forcing trauma recollection and restructuring.  Ultimately, therapeutic writing meshes personal and social purpose, benefiting — and even transforming — reader and writer alike.

December 2014, senior thesis: It strikes me as funny that tennis’ healing power is no longer limited to the court for me. Today, it encompasses the court, television, tweets and most importantly, the keyboard on which my fingers flutter right now. When I read and write about tennis, my player, writer, fan and coach identities converge harmoniously on the page, making the game more beautiful than ever. It’s funny to me, too, that a game I guarded, locked in the privacy of my mind, materializes naturally on the page. Maybe, watching the game and capturing it in writing are my personal means of expressing everything I couldn’t when I only experienced it on the court. I rarely play now, yet I experience the game more deeply, as it weaves a path through my myriad interests, disciplines and habits.

I took up tennis at 15, late even by the standards of the Midwest, where it simply isn’t a lifestyle like it is on the coasts. I’ll begin with the end of the court’s reign as the cathartic place in my life. When I arrived at Drake University, I was determined to continue playing tennis. In part, I enjoy playing and wanted to stay in shape (and the Hubbell Dining Hall sugar cookies were a dangerous force in my life from the outset of my illustrious college career). In another part, though, tennis was ingrained in my identity and provided a go-to — and almost too easy — means of relieving whatever so-called trauma struck me that day. Tripped up the stairs (again)? Hit the hell out of a bucket of tennis balls, and I promise you’ll feel better for a little while. But I quickly realized time on the court relieved only the initial hurt of my problems, some far more concerning than flailing up the stairs in front of, say, the ‘love of my life.’ Then, as the demands of schoolwork and adjusting to college cut into my nightly serving ritual and tennis time, I felt lost, unsure where to turn. Eventually, with the help of Twitter, I realized my passion for tennis writing and expanded my earlier definition of healing through sport. I began following more and more tennis players and even live-tweeting matches. Yeah, a bulk of my tweets read something like, “Roger Federer is the man and/or a divine being and/or the greatest,” (and so on), but in those teenage-Taylor Twitter binges (“rants” feels a bit harsh, I think), I discovered a new dimension of the game and the healing it provided me.

With the help of my favorite players’ post-match interviews and their books (I once impressed the guy I liked by lending him my copy of You Cannot Be Serious — literary classic, people — by John McEnroe), I began to form my own connections between tennis and life. Connections I realized didn’t require a pristine court, a certain color of tennis skirt or some fancy trophy. Per my generally un-athletic background (I was assigned to the outfield in first grade T-ball — the ultimate form of rejection), I never planned or expected to become some collegiate tennis star. But I never thought I would stop playing, assuming that if I did, I would relinquish a key part of my identity. In high school, I was known as the girl who liked to play tennis and was somewhat decent at it. Without the physical act of striking forehand after forehand and grumbling, “Why can’t you hit anything in today?” I didn’t know what would become of me. The physical and psychological felt inextricably intertwined; without one, the other would cease to exist.

Though I haven’t forgotten the proper way to hit a forehand, a backhand or serve with my trademark degree of mediocrity (even with all that revenge-fueled practice, I never could figure out the whole power-serve thing), I seldom play tennis anymore. And I’m fine with it. Thanks to a fuller portrait of tennis beyond the physical match, and a better sense of identity that inevitably comes with experience, I can continue to engage its cathartic capacity as I type away, reconstructing other players’ game and life narratives. Amid that process, I’m constructing my own.