I am a new public defender in central Wisconsin. I was admitted to the Wisconsin State Bar in September 2020 after earning my J.D. at the University of Iowa College of Law in May 2020. My pronouns are she/her/hers.

The summer after my 2L year, I was the Bonney Legal Fellow at the ACLU of Kansas in Overland Park. During my 1L summer, I worked as a legal extern in the General Counsel’s Office at the Minnesota Department of Human Services in St. Paul.

Before law school, I worked as communications coordinator at the Science Center of Iowa in downtown Des Moines for three years. My lifelong love of museums led me there as an intern in May 2014, and I started working full-time at SCI in January 2015.

I graduated from Drake University in December 2014 with bachelor’s degrees in news-Internet journalism and writing. During my time at Drake, I ran the campus newspaper, The Times-Delphic. I even dabbled in mobile app development. While at Drake, I also realized my passion for language. I have a writing degree with a concentration in creative nonfiction.

I am a proud lifelong Midwesterner born in St. Louis Park, Minnesota, and raised in Newton, Iowa. 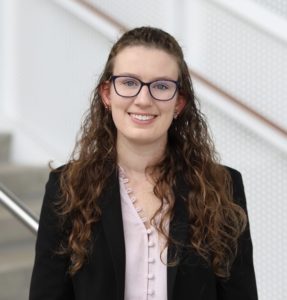