As a journalist, I enjoy dabbling. As a journalist in a small town, I dabble in rural culture. Though I’ve lived in Iowa for 20 years, I had (and have) a lot to learn about my home state’s signature trade: agriculture.

Last week, I drove 30 miles of snaking back roads to a ghost town (the whole town is a church, about 10 homes and what was once a general store) to watch a family barn-quilt.

Barn quilts are bright, color-block plywood squares that adorn the face of a barn. A grandmother, her son and 8-year-old granddaughter greeted me with strong handshakes, their palms splashed with neon paint.

They walked me through the barn-quilting steps from sawing the wood to touching up uneven lines and colors. Though I’m not a barn quilt whiz (yet), I enjoyed dabbling in a new trade.

Plus, if barn quilts storm the interior design world, I’ll be ahead of the craze.

A second time last week, I had the chance to dabble in another staple of rural living: the cofferdam. I admit, when assigned to cover Delmar’s new cofferdam, I spelled the machine as “coffer dam” (a sign of my urban roots).

When I got to the Delmar Fire Station Friday, three men welcomed me, beaming at a giant red tube. The tube, they explained, helps firefighters in a grain elevator emergency by reducing the force of the corn on the trapped victim.

Though I’m a young journalist, I’ve already had many chances to dabble in unexpected trades. This job gives me chances not only to meet and talk to new people but also experience a slice of their world.

While I hope to work in a city someday, I admit I enjoy dabbling in the trades and quirks of rural living.

Plus, I now know just what to give Mom for Christmas (a custom barn quilt for our front door, obviously).

In just 15 days as an inhabitant of DeWitt, Iowa, my notions of “news” have changed drastically. This is my first job at a “big-kid” paper, The Observer, and on day one, I awaited the flood of “big-kid” stories — stories that rile the big wigs, stories that reveal misconduct, stories that question established social institutions.

In the past 15 days, though, I’ve realized rural towns rely on the paper not for red-faced big wigs or rumors of suspicious funding allocations.

Rural towns rely on the paper for community.

The “Family news” section draws rural readers, and when one family celebrates, the whole town celebrates.

On Friday, for instance, a lady stopped by the newsroom to buy an ad for her 75th high school reunion. The whole Observer staff congratulated her again and again, asking about the plans, her class and her life since high school.

In a world of bad news, the stories I cover in this town are refreshing.

A 2013 high school graduate who runs a self-developed community outreach program. The Lions Clubs that united to raise funds for a family that lost its home and beloved dogs in a fire. The project that allows each town in Clinton County to build a barn quilt for the upcoming county fair (Barn quilts, I discovered, are big, bright mosaics that decorate the top of a barn).

My “big-kid” stories here circle around community highlights, and though I hope to cover a controversial school board decision or questionable funding allocation at some point, I admit I’m enjoying the feel-good stories on my to-do list.

Though I plan to work in a major city in the future, I hope to take a slice of the DeWitt way with me. I hope to show my readers that the news is more than a whistle-blower and a bad-news bearer.

It’s a channel for community.

This has been a week of firsts for me.

I packed my life (well, some of it) into less-than-sturdy cardboard boxes and moved two and a half hours east of my hometown. I moved into a place all my own (one that boasts the most blindingly pink bathroom I’ve ever seen).

Most notably, I began my first full-time job at my first “big-kid” newspaper, The Observer. 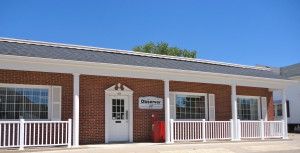 In just five days, I’ve gained a new perspective of the news business and how news functions in the rural community.

The locals here crave print copies of the bi-weekly paper, a desire that shocks me. Almost daily, readers (all of whom the receptionist greets by name, of course) drop in the newsroom to buy the latest issue.

This town is proof that print isn’t dead yet. Plus, I suspect when a local kid has a photo or even a mention in the paper, he winds up with a sky-high stack of that issue as all the neighbors donate their copies (for his scrapbook, obviously).

The paper is as much a news source as a space to share life’s milestones, and it’s clear that inclusion is second nature for the locals. Graduation open house invitations run in the paper, usually with the tagline, “All are welcome!”

At The Times-Delphic, I cover a single community isolated to the few blocks between University and Forest Avenue in Des Moines. Here, though, the community spans a few blocks to encompass a handful of rural towns linked by a web of winding highways.

That change has forced me to drive across Clinton County in pursuit of stories. As a navigationally challenged journalist, I’m resolute to master the trip from Goose Lake to Charlotte (pronounced “Char-lot,” strangely) to Low Moor and back to the newsroom — all without the syrupy voice of my GPS saying, “Turn right in 250 feet.”

I’ve dabbled in a few elements of the paper already, too. I am a news writer, a features writer and a columnist. I also shoot photos.

Though only five days in, my first full-time job at a “big-kid” newspaper has yielded a host of new experiences, lessons and goals.

My first goal: Stop pronouncing the town of Charlotte like the name of Fern’s spider pal in E.B. White’s children’s classic.