He texted me from airport gates and streets named “Taylor” in faraway cities. “Taylor Street” in San Francisco lingers in my mind, as if I’ve been there before, as if I existed then, there, with him. The “Wish You Were Here” postcards never came.

Innocent objects in my apartment bear unwarranted significance. The plant I bought one Saturday night when he was in Asia. The photo of snow swirling from my apartment window on a December day when he was in California. The stacks of books that disappeared and the new ones that replaced them, each one a mark of time passing, events missed, two lives mismatched like my middle school outfits. My life passed in the photos I texted him, exhibits of the ordinary. 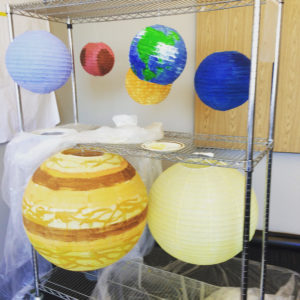 I highly recommend painting the solar system when you’re in need of perspective.

The “Wish You Were Here” postcards never came.

He told me stories, showed me entire photo albums. I existed only when it was convenient, close; I wished I were there. I wanted to exist when it was tough, when we were far apart.

He was transient, and I was, too, I suppose, trapped in a cycle of doctor’s appointments and blood tests and what ifs. “Meaningful” and “forever” are too often synonymous, as if the relationships that last are more important, more pivotal than the ultimately noncommittal.

For a long time I rejected the notion that it had been worthwhile, focusing instead on the texts that grew farther apart, the goodbyes we simply forgot to exchange at that last happy hour. Yet he was exactly what I needed when I needed it. I needed to be committed to my health, to the half-marathon I was training for, to the LSAT. END_OF_DOCUMENT_TOKEN_TO_BE_REPLACED 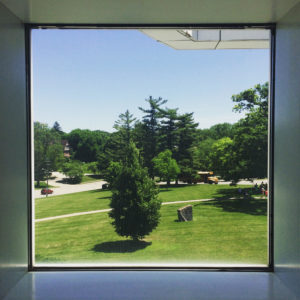 It’s Monday, so here’s a peaceful lookout at the Des Moines Art Center.

I wrote in doctor’s waiting rooms, in the winding hallways of Mercy Medical Center, in the infusion room, in my hospital bed between naps. I wanted to capture everything, my feelings, my pain, the sight of forbidden Hy-Vee cake on my mother’s birthday. My writing this year has been aggressively present, work that exists and thrives in the moment it first existed, doesn’t dare to extend too far beyond the physical and tangible.

Transcending the physical experience scared me, as if recognizing the reflective might be too much, another needle prick. I’ve been feeling better, perfectly well, even, for a few weeks.

I hid my writerly mind in LSAT logic games and reasoning timed tests, productively procrastinating the reflection my free time would inevitably offer.

As a life writer, reflection is my wheelhouse; I look back and ruminate constantly, writing and re-writing about the same experiences over and over, convinced there is another nugget of significance forever waiting to be unearthed. Yet this year I found survival in the now. I wrote about cinnamon bun cravings and my breakup with beer and throwing a gluten-free fit when bread-loving Oprah popped up on my TV. END_OF_DOCUMENT_TOKEN_TO_BE_REPLACED 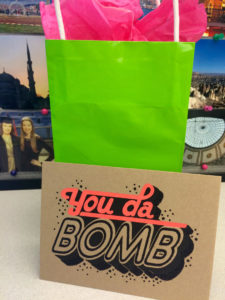 Thanks to my coworkers for the positive LSAT vibes!

Tiny poke, quick poke, little poke. The words and needle pricks add up after a while. I didn’t feel the needle on Wednesday as the nurse and I chatted about our mutual experience learning Arabic. It was a bizarrely normal moment; me rambling about Turkey and Arabic and calligraphy and writing right to left — with the needle in my arm.

In my fledgling days of life writing, I wrote exclusively about major, sweeping stories and lessons, the kind that fit nicely into a calculated essay. The past six months upended my still-lingering compulsion to write about the momentous, distilling reflection and learning into single moments — tiny, quick and little, like every needle puncture.

As I tally up answers and scores and sections for the LSAT (which is, terrifyingly, tomorrow), I can’t help but feel unsettlingly, briefly calm. I often cite the randomness of life as one of its chief merits, but here, it is beautifully analogous, each answer adding up to a test, a score, a new goal and path.  END_OF_DOCUMENT_TOKEN_TO_BE_REPLACED