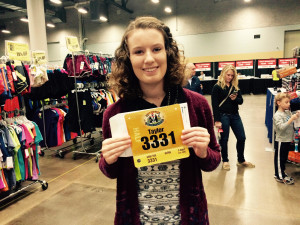 There’s a bag of ice on my ankle, I fell off my bed this morning and I can’t count how many happy hours I skipped over the past eight months. Yet I’m sad the half-marathon is over.

Running is lonely in a lot of ways, much like tennis. Maybe that’s why I like both. When I committed to the miles, I committed to hours locked inside my own brain, hours of dwelling punctuated by the quest for oxygen.

In the past eight months, I went vegetarian. I lost five pounds. I worked through a failed relationship, sometimes with mid-run muttering. I learned to run in the morning, something that had left me dazed and dizzy before. Once, I cried mid-run as I ran through Waterworks Park, where a beloved coworker and friend tragically passed away in February. I woke up at 4:45 a.m. and watched the sun rise from the Capitol steps, rare city quiet a sharp contrast to my rambling morning mind.

As I hobbled from the finish line wearing my medal, I realized the moment I crossed it isn’t what I had been working for all along. It was all the itty-bitty epiphanies throughout the eight months of training — every “Holy shit, you’re crazy,” every 7:30 a.m. Sunday run. Every lonely, exhilarating moment trapped inside my psyche, my body battling the desire to stop and walk, my brain battling the usual blend of raging inadequacy and 20-something angst.

There is bizarre comfort in knowing that running, for me, will never be about times or splits or speed, but about the potential in loneliness, in a goal that belongs to me and only me. When I started running, I perceived it as an act of survival. Eight months later, I perceive it as an art of survival, one that has produced myriad blog posts and essays-to-be, two new friendships and an environmental consciousness that led me to vegetarianism.

I didn’t feel particularly beautiful when the photographer snapped my official race photo at mile 11 (but really, who put the camera there? Why not mile one?), but there is something deeply, enigmatically beautiful about taking on that which helps me survive.

Maybe I’ll move from surviving to thriving someday – but I suspect that milestone is a more than a few bowls of post-race pasta and ice packs away.

Readiness tastes like Hawkeye vodka. With each ping pong ball that bounced off the table and onto the concrete floor varnished with years of spilled booze, I felt more and more ready to leave. Ready to leave the game, the house, the cheap lemonade mixed with cheaper liquor, the college scene.

I had waited for the moment of grandeur. I would probably be wearing some fancy outfit at the time, and “Run The World” by Beyoncé would be playing in the background. But my post-grad readiness emerged at a “Flannel and Handles” party in the cramped basement of the PiKapp house, red solo cup of Hawkeye lemonade in my hand. Readiness is subtle like that.

In the spirit of my upcoming half-marathon, I’ve been meditating once again on readiness and how it manifests in the grown-up realm, one without the rigidity of semesters punctuated by pseudo-breaks and final-exam mayhem. Without the expected milestones, the checking off of another semester, the counting down to graduation, readiness has again taken on that innate subtlety.

Readiness looks like the latest “miracle” half-marathon plan in my running magazine, each iteration promising the PR time, the quick recovery, the invincibility. The chart is neat, orderly and, for me, stripped of the emotional element of readiness, the one that can throw me into a spell of fanatic overexertion followed by paralyzing inertia.

In eight months of training, I’ve controlled not the mileage but the emotion, pining desperately for that feeling of readiness, some celestial “You can do it!” With every additional mile, I added new views of Des Moines to my fragmented internal photo album, 801 Grand’s towering frame peeking out from behind the canopy of Water Works Park. More mileage meant more new perspectives of my city, which meant I was more ready for 13.1. Or something like that.

Eventually my mental photo book gave way to the real thing as I paused to capture my next mile, next view. Flipping through photos of the fading skyline, I wanted to feel ready. Creating tangible evidence of my progress, of the eight-month half-marathon journey, would quantify, validate and prove my readiness.

After eight months, a mere 15 days of my half-marathon training remain, and I don’t feel ready. It’s OK. I’ve stopped relying on the skyline to guide my sense of progress, and I assure you I won’t indulge in a red solo cup of Hawkeye lemonade (bless my post-grad drinking standards).

But come October 18, I hope readiness tastes like a cheap, post-race Coors Light.