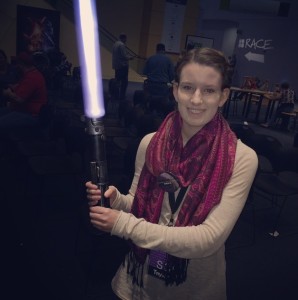 This lightsaber photo was captured long before I ever watched the original “Star Wars” movies, and now I feel like a wannabe.

Bag of gummy worms in my lap, phone in my hand, thumbs firing away questions and commentary about Jabba the Hutt’s Mucinex-cartoon-like appearance and the whole Luke and Leia situation, the clock well past my 10 p.m. bedtime. I bid 2015 farewell in the most unexpected of ways, binge-watching the original “Star Wars” films for marketing research.

It was a bizarrely fitting way to end 2015, a year of adopting new identities, each equipped with challenges and milestones that feel most real only when I look at the tangible mementos that accompany them.

“Half marathoner” still feels like a far-fetched identity, one that doesn’t acknowledge the reason I reason I embraced the challenge in the first place. I felt powerless, erased from the existence of someone I cared about; running, I thought, would restore me. It didn’t work.

While I loved training for the half and am glad I did it, the restoration wasn’t in that specific act of running but in the psychological experience it instilled in me. Before embarking on my half-marathon plan, I rarely set my phone aside for more than a couple minutes, maybe a half-hour for the occasional two- or three-mile run. Running unplugged for one, two, even three straight hours revealed the before-unrealized potential in uninterrupted reflection, as I worked through the same nagging feelings and questions, mile after mile, day after day. Per usual, I had allowed the tangible and intangible to become inextricable; in separating the physical and psychological experiences of running, I realized my physical ability to run long distances and my psychological ability to be more present in the art of reflection. 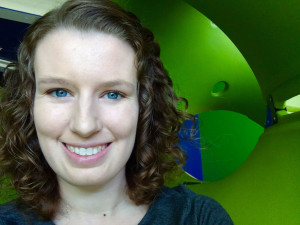 If you visit SCI on a Friday at 2 p.m., I’ll (attempt to) make sure you don’t fall off the green thing in the background.

I became a marketer in 2015, and with it came the awesome role of museum professional, complete with fiery experiments, a weekly hour-long shift guarding a 10-foot tall geometric climbing structure and yes, binge-watching “Star Wars” because I had never seen it. Marketing in the museum world has taught me to embrace audiences and fandoms and experience them firsthand. While I don’t feel compelled to buy all the “Star Wars” merchandise in sight, I feel better prepared to market “The Force Awakens” and, frankly, to appreciate why so many people love the franchise.

Optimism and realism blurred in 2015 in one particular failure of mine. I let myself become an object of convenience for a guy I liked; we’d meet up for drinks or dinner but only when it was convenient for him. “Where is this going?” forever led to, We’ll see,” my naive hopeful clouded by his mesmerizing, hilarious stories and, well, the “What if?” quality of the whole thing. I kept telling myself I’d say “no” the next time he texted me suggesting we meet up. It is proof, perhaps, that New Year’s resolutions don’t have to waltz into the year with grandeur and confidence. They can exist in relatively minute stature like a silent reminder that it’s OK to say “no.”

A chicken noodle soup craving, weirdly, remains one of my more prominent memories of 2015, proof that new lifestyles are painful and whiny sometimes. Amid a week of sickness, all I wanted was chicken noodle soup. I tweeted about it, texted about it, complained about it, my, “I’m vegetarian because it’s better for the environment,” explanation giving way to, well, an ugly inability to be rational about a lifestyle change I had made months earlier. I didn’t eat the chicken noodle soup and realized that committing to things, whether it’s a plant-based diet or a half-marathon, is and shouldn’t be easy. 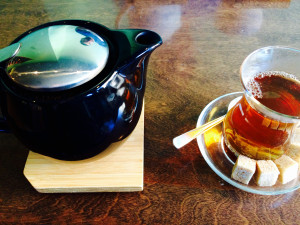 I found Turkish tea in Des Moines and swooned accordingly.

My Turkey enthusiasm took on new dimensions in 2015, as the Suruc and Ankara attacks, media censorship (and jailings), increasing violence between Kurds and Turks and the country’s ever-troubling refugee crisis captured the world’s attention. I saw a country I love, one that brought me unprecedented joy and peace, ravaged by division and unrest. Somehow, I finally found myself writing openly about my own Turkey experience in all its exhilarating, rule-breaking, soul-crushing early-20-something glory. Turkey, as always, remains a complicated passion for me, both personally and from an academic/newsy standpoint.

In 2015, I didn’t always eat my vegetables, I asked ridiculous “Star Wars” questions (apparently) well-known to the entire world, I ran to escape the reality of my feelings and ended up running into them, I dated the wrong guys and I ate mac-and-cheese for days on end. But I returned all my library books on time, learned how to properly cook tofu, rediscovered the joy of reading for fun, hosted my first-ever themed party and journaled 5,449 words.

If I stop writing, I fear I’ll vanish, 2015 life fading into the broader cultural era of #HotlineBling, millennial scrutiny and the introvert vs. extrovert non-debate. While I’d love to chat with you about my favorite Drake dancing memes (I mean, have you seen the tennis edition of Hotline Bling?), and while I’d love to debunk the old “Millennials are entitled and lazy” rubbish, I’m captured by the little moments that will never occupy a year-end recap or cultural lore. For me, 2015 was a battle with inconvenience; in particular, the notion that my existence is inconvenient.

Feelings are by nature inconvenient, the way they strike unexpectedly, leaving me tearing up at some seemingly minute detail. And when I’m ready to talk about something, the way audible words fail, leaving me, as usual, to furiously type one-liners in my iPhone as I walk through the skywalk on my way to who knows where, nearly barreling into walls, poles, signs, the like. The nagging conclusion that my existence is inconvenient is especially potent when I’m trying to impress someone I like a whole lot. I fear I’m texting too often, asking too many questions, trying to impart all the supposedly ‘cool’ things about me. My words become peppered with “justs,” “Sorry to bother you” and, “I was wondering if maybe,” my sense of self-esteem unconsciously negated in language.

If I stop writing, I fear I’ll vanish, and so will my feelings, exhilarating, nagging, unexpected and inconvenient alike. This post is, perhaps, a contract of sorts, one in which I pledge to quit perceiving my existence as inconvenient, quit trivializing what I have to say through “justs” and “maybes.” I’ll say, “Hi, I want to spend time with you because I like you,” and I’ll ask all the questions I damn well please.

Get the name of the dog. This time, though, it wasn’t the name of the dog but a pair of earrings, rainbow earrings, gay pride earrings, that made the story. That made me cry — for the San Bernardino shooting victims, for a childhood friend’s family, for a coworker who had committed suicide and finally, for the words I still can’t find.

“Get the name of the dog.” That was code for, “Details make the story,” per my beloved Drake University journalism professor Rick Tapscott. Three days after the two-year anniversary of his sudden passing, it was a stunningly written, heart-wrenching LA Times story on the San Bernardino shooting that twisted the words on the screen as I sat at my cubicle, their swirls and swoops spinning in a teary-eyed kaleidoscope.

Amid the blur, I realized how hard it is sometimes to simply exist. The first week in December remains trying for me, forever tinted by Rick’s passing and, six days later, the tragic loss of a childhood friend’s beloved older brother, then 24 years old. There is at once nothing and everything to say, the pages of journal swallowed by page-long paragraphs.

Rick would go crazy if he saw the size of this paragraph, I think to myself, but he’d honor the editing process, too, permitting my rambling throughts to, as Anne Lammott would say, “romp” across the page.

The editing process confounds me during the time, one ravaged by mass shootings, anti-Muslim rhetoric, remembering loved ones gone and comforting those to whom they were closest. I want to rant and ramble and romp. At the other extreme, I’m tempted to be silent, knowing full well that my words — any of them, all of them — will never, ever be enough.

That’s why the LA Times piece by Alan Zarembo struck me. It was raw and beautiful, well written and painstakingly edited to capture the nuance of loss. Though I cry every time I read the story, it provided comfort as I wrote a card to my childhood friend, as I read and re-read recent journal entries, highlighting fragments of language and emotion to form this post.

I don’t think I’ll ever be able to find all the words I’m looking for, but this week of the year always reminds me that there’s clarity in the details. The lone tear that falls in the store when I find the right card for my friend. The folded “Rick’s Rules” reference guide I found in an old college folder this past week. The single sentence of highlighted text among a pages-long journal entry, the shaky entrance into my lifelong quest to find the right words.