However, scanning the daily headlines doesn’t make me the up-to-date gal I claim to be, at times.

As I cracked “What Everyone Needs to Know about Islam” by John L. Esposito last week, I (mistakenly) expected to discover nothing new. I was an avid news junkie, one familiar with the Middle East. I was a global citizen, one who sought non-American news outlets.

I’m now 122 pages into the book, and my views of Islam and the Middle East have evolved noticeably.

I now see both sides of the hijab debate. I now see the likenesses among Islam, Christianity and Judaism. I now see the tough decision facing Muslims today — follow ancient religious laws or adapt those laws in the developing global society of 2013.

Likewise, Esposito’s book taught me that the news, while I love it, isn’t enough. As a news junkie, I have a responsibility to seek knowledge beyond the media discipline. I need to watch movies, watch documentaries, read academic essays, read fiction and read academic books.

Until I land in Istanbul in eight months, I await a new discipline. While I discover new things about Islam on each page of Esposito’s book, I’m eager to jump into a discipline all my own: experience.

At the end of the school year, my fellow Bulldogs and I always head to Spaghetti Works, a Des Moines staple, for one last meal. As we spin the slimy noodles and gulp ice-cold Italian sodas, we discuss the year — the highs, the lows, the mistakes, the lessons, the realizations.

This school year, I took on a new role as a manager. I was no longer solely responsible for my own work. As sports editor at The Times-Delphic, I had to manage a staff of 20 writers, some novice, some not.

Slowly, I realized what kind of support each writer needed. Some had never been to a tennis match. Some, I only had to say, “Hey! Write 500-600 words about men’s tennis,” to receive a well-sourced, publishable recap.

Management in the news is all about the staff and what it needs to succeed. It’s not about a title, a fancy nametag or using the “boss” voice whenever possible (I have yet to develop a “boss” voice, and that’s OK).

This school year, I also realized that I want to take my talents to a major city one day. 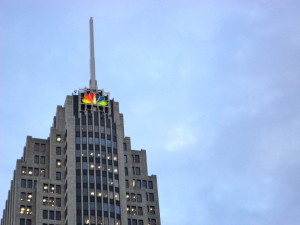 In October, The Times-Delphic staff visited Chicago for the National College Media Convention. I was in awe as I gazed at the glowing NBC logo atop an insanely tall building. My awe didn’t stop at NBC, though.

Later that same day, I gazed up at the glowing logo at The Chicago Tribune. That was all it took to convince me that I want to live, work and write in a major city.

Lastly, I realized that I am bilingual as a J-School and English student. In a single day, I wrote an essay about revenge in the English Renaissance and a Times-Delphic story about the delay in the plans to install a key-card system in the residence halls.

The two disciplines mingled in my mind, making for two odd assignments, initially.

My revenge paper consisted entirely of one- to two-sentence paragraphs, an English no-no.

My Times-Delphic story included words like “oppositely,” a news no-no.

Luckily, my edits fixed the odd blend of English and news on the page.

Alas, my stomach is now roaring, so I am off to relish in a heap of pesto spaghetti, the company of my favorite Bulldogs and the realizations of my second year at Drake.

Recently, as I talked to a news-Internet professor, he said the sentence I had long avoided: “You know, Taylor, you won’t be able to write as much next year as editor-in-chief.”

While I realize the scope — and limitations — of my new job more and more every day, I had sought to delay the inevitable as long as I could. Maybe, I reasoned, if I ignored it long enough, I could devise a plot to trick both sides of my Times-Delphic identity.

Since that talk, though, I have realized that I won’t be able to write every story that interests me.

I have to rely on my staff to take over the bulk of a job I have long loved.

While I won’t be able to give The Times-Delphic as many stories in 2013-14, I hope to give guidance, instead.

It’s a give-and-take at The Times-Delphic, and it’s time I give The TD a new side of me.