I often think about all the different iterations of me that have existed in each of the places I have lived: nine cities in four states, by my count. We all carry every place we have ever inhabited in our bones, in my opinion.

Those four instinctual turns to the grocery store, street names, intersections and GPS directions quickly replaced by that specific dip in the road, the one that signals a left, the tree that got struck by lighting two summers ago. That one’s a right turn. 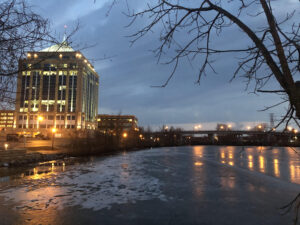 I wasn’t sure if I really wanted to write about Wausau, to “wrap up” what can only be described as a year with some of the highest highs and the lowest lows.

But I also believe it would do a disservice to the past year, and maybe to my own mental health, not to at least try to ruminate on it and capture it, at least a little.

This was the year I spent the most time alone that I ever have in my whole life. I guess that happens when you move to a new state to a city you had never heard of in the middle of a global pandemic. After three years of law school followed by immediately studying for the bar exam, I thought free time was all I wanted, all I had longed for while pacing around my apartment with a bag of Cheetos in one hand, secured transactions flash cards in the other.

Plus, I suddenly, somehow, had too much to write about. Too many emotions, major life changes, and the never-ending new-attorney inner monologue that was (and still is) a constant hum of “How do I do any of this?” I have been a licensed attorney for just over a year, and I left Wausau a couple months ago now. I now live with my boyfriend in the city where I practice.

When I talk about my first year here in Wisconsin, I often say, “It was a journey,” in part because it’s true and in part because I don’t really know what else to say, or where to begin. Per my Type A, list-loving, stereotypical oldest sister sensibilities, I sometimes wish I could somehow isolate each experience/emotion of this past year and parse it out. I suppose I have done that in therapy, to some degree, but I would like it all to be more orderly. Rude that I cannot put the experiences/emotions of the past year in alphabetized folders, pulling each one out of a filing cabinet when I want to interact with it, putting it away when I do not.

More than any other year in my life, this past one taught me that it is possible to feel many, many things at once. Fear over messing up a client’s case in literally any way, large or small. Relief when I learn (again and again) that the Scary Thing I was obsessing over at that given moment turned out to be not so scary after all, and that I know how to do it for next time. That it’s OK to be angry as a woman and that rage is not a waste of my time or energy as I had been taught to believe my whole life. That sometimes things really do work out. 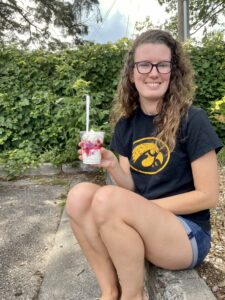 I have established new routes here in Stevens Point—the kind you can’t find in any GPS app. I know that to get to the grocery store I turn after the Log Cabin Bank, as I call it (I could not tell you what its actual name is). For the park I turn left at the little stone house that looks like the cottage from The Holiday.

The thing about establishing new routes in new places is that the old ones never go away, not really. Sometimes I Google the routes I could take from the places I’ve lived in the place to where I live now, to think about how far I’ve come, literally, and to remember the times I took a risk and moved to a place I’d never been or never even heard of and found a life and a version of myself I liked there, even if it was temporary.