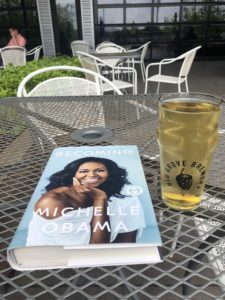 My post-finals self-care consists of going to the movies and reading books at bars, so this image just felt right.

In the three weeks after I finished my 2L finals in May, I saw five movies. Some I saw with friends. Most I saw alone.

I started with “Long Shot” the day after my Criminal Procedure final. It’s the one where Seth Rogen’s goofy but loveable character becomes the speechwriter for the beautiful Secretary of State played by Charlize Theron. They eventually fall in love because of course they do.

I remember going to “Booksmart” on an absurdly warm Tuesday morning, and I was the only moviegoer for that showing, carrying my trusty blanket into the theater on a 90-degree, 100-percent humidity day (I swear it’s always cold in there). I saw so much of myself in Beanie Feldstein’s and Kaitlyn Dever’s high school good girls turned rebels (I was in the so-called “God Squad” in high school, so it checks out).

There was also “Aladdin,” “Rocketman” and “The Sun Is Also a Star.”

Going to the movies in those three weeks before I moved to Kansas for the summer helped me finally piece myself back together, helped me rediscover how to feel a full range of emotions, a range I had lost almost completely during the worst semester of my life.

Within four weeks at the end of first semester of 2L year, my grandpa died, and then the guy I was dating broke up with me. A week after that, I went to London for a law school study abroad program, spending the next 16 days going on field trips, spending a day in Paris, attending lectures, writing a paper and taking a final.

I left for the trip thinking I would just “Eat Pray Love” my way out of everything that had happened in those few weeks. Surely I would watch as my problems and the feelings that accompanied them simply evaporated like the steam off the mulled cider I drank in London. Surely!

By the time May rolled around, I realized I hadn’t dealt with a lot of bad shit that I needed to deal with, finally.

Law school makes it nearly impossible to deal with a personal crisis of any kind. I sometimes describe it as a flattening of feeling, highs and lows giving way to a deep, pervasive numbness, the kind where even my usual Sad Girl movies, the kind you watch when you need to have a good cry, can’t even do it for you.

This winter break (so far) I’ve seen “Jumanji: The Next Level,” “Knives Out” and “Little Women.” Besides (still) obsessing over all the fabulous vests in Greta Gerwig’s “Little Women,” I’ve been thinking a lot about one of Amy’s lines from the movie: “The world is hard on ambitious girls.”

If that isn’t the realest take around. But I’ve found that things like friends and memes and yes, movies, make it a little bit easier. At the very least, they help me regain footing and feeling in the world, and from that I can always move forward, once again.