Late-night tennis is deeply comforting to me. The way I can sit on my couch in my pajamas, living room lit only by a vanilla-scented candle and the blue glow of my TV, my 2017 Wimbledon towel wrapped around my shoulders.

It’s 3 a.m. The back-and-forth of the ball nudges me awake, gently. Tennis is a profoundly solitary sport. It’s just the player on the court. From the crouching ball kids to the umpire’s towering chair to family, friends and coaching staff high up in the player’s box, tennis players are literally on their own level — always alone.

Although I love going to tennis tournaments, there’s something pure, transcendent, even, about watching tennis in the middle of a cold, January night in Iowa, mug of tea in hand. The way “Quiet, please” echoes through my apartment, giving me space to watch undisturbed, to be still. 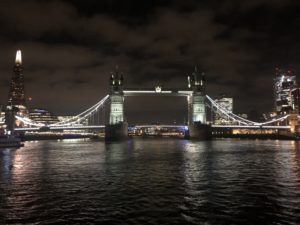 It turns out that studying abroad in Europe for two weeks did not actually help me deal with a recent disappointment — I know, truly astonishing.

Healing, I find, happens in unexpected, even mundane places. For me, it didn’t happen as the sun set in Paris, rain smudging the city’s famous lights, softening their glow as my friends and I walked along the Seine.

Healing happened over two sleep-deprived weeks in January as I huddled under blankets on the couch at 4 a.m. night after night, clutching my tea while swearing at Roger Federer (out of love, of course).

The rhythmic nature of tennis and the outlet at which to yell and cheer provided the space I needed to process a non-breakup breakup — the collapse of something that hadn’t fully formed in the first place.

I learned that when a man’s friends say rude things about you in front of you (or at all, really), it’s a reflection on him, as well (don’t tolerate, let alone date, men who don’t call out their male friends on their bullshit, good people). For the first time in my life, I learned how to initiate important conversations and articulate my feelings. I learned how to set healthy boundaries, to say, “Please do not contact me.”

I didn’t once apologize for those feelings.

These revelations didn’t come where I expected them to: not on the train ride through the Parisian countryside on a sleepy Sunday morning, not from the 32nd floor of London’s tallest building over afternoon tea, but during an early-ass Australian Open marathon-watch session from my couch.

It turns out I prefer having major revelations while wearing pajamas anyway.