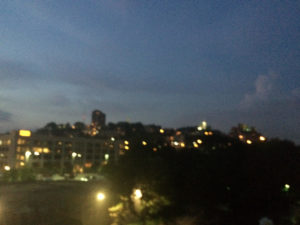 I got up, filled a glass with water and as soon as I turned around, the light had dimmed, returning my room to its familiar color. Summer is suspicious like that, the way sunlight shines with such confidence, clinging to skin and sunglasses and scalps, tattooing me with perpetual shadows.

The heat and lingering days threaten never to end, only to be replaced by fireflies when the sun finally relents, reminding me of summer’s beguiling character, its effervescent, overpromising light.

“You’re going to have the best summer ever!”

I’ve heard it several times; I mumble affirmatively. I’m traveling to London and Vienna with my mom and youngest sister. In London, I’ll finally meet the Twitter friend whom I’ve been Facebook messaging for more than a year now. I’ll play tennis obsessively, staying late at the courts until bugs hover in winged clouds under the lights.

But summer is cunning to me, the season of which I expect so many things. This is my last summer in Des Moines before law school in Iowa City. 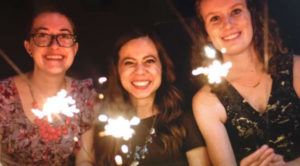 Humidity and heat intensify feelings in the summer, owning every last bit of light like sparkler ashes that fall to the ground, glowing bright beyond their status as relative specks.

Anticipation sinks in as I fumble for my tea and cereal; it’s a new week.

Gold light peeks into the curtains that cloak my bed and nightstand, an extra partition from Monday morning. As if to tell me, “Summer is coming, bitch.” I remember last summer; it was cruel and kind at once. I quit everything, letting summer restore me after a months-long illness. The sunlight saturated my walks to work, making up for a winter and spring spent inside doctor’s offices and the hospital.

I let the wrong men hang around for way too long; maybe I was trying to mimic the summer sunlight. After all, summer thrives in the extremes, wherever the light is too bright, where it burns out too fast, too soon. I want to save it, but I’m not sure what I’m saving.

He likes girls like me, he said, the kind who are challenging and determined and a little bit obstinate.

Sunscreen, booze and smoke swirled through the air in a perfectly charged summer concert haze.

The crowded setting amplified our private conversation, words interrupted by drifting music and bass drops and cans cracking open. He told me he loved me, but he knew I had things to do that didn’t include marrying him; he was right, of course.

He needed to figure out what to do with his life, he said. Wasn’t I doing that, too, but differently? It is funny how I oscillate between not feeling good enough, somehow, and feeling like I’m too much.

That’s why he has been so distant lately, he said. I was young and determined and maybe a little dangerous as a result.

For months we returned each other’s texts, reluctantly on both ends, I’m sure, to some degree. I wanted to save things, but I wasn’t sure what I was saving.