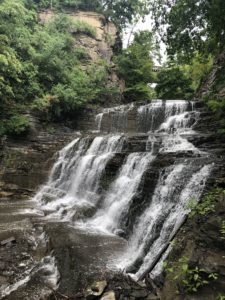 I still feel personally attacked by how beautiful Ithaca is.

I don’t trust summer. I’ve said it before. The heat, the mosquitoes, the humidity. The boldness of a season that blazes on, burning skin, igniting old flames, blurring deadlines and routines in simmering heat. The sunlight never seems to dim in Minnesota, clinging to the last sliver of brightness.

I’m on a plane right now, and I’m bonding with an adorable toddler in the row in front of me. Summer is like that. You’re friends with everybody, suddenly, wholeheartedly, as if the warmth and sunscreen somehow unite us all. I don’t trust summer.

My Minnesota summer has been amazing. Rife with long, meandering runs and meaningful legal work and crushes I can’t get out of my head.

Catching feelings was inevitable, really. I swear the sun and sand and heat and humidity conspired against me. Summer, as usual, is beguiling, cunning. It wanted me to feel things, damn it.

I’m on my way to upstate New York right now, somewhere I’ve never been. I couldn’t decide on a dress for the wedding I’m attending, so I packed two. Summer is extra like that, the way it enables my indecision, indecision fueled by pop-up storms and crop tops and men I probably shouldn’t text back.

Rain is falling in Newark, forming little waves across the runway. It pools in some places, as if gathering all the fury of summer into a puddle of love and light and lust.

Blurry halos surround each streetlight, encircling them in a hazy glow. The haze from one blends into the haze of the next one. Summer is like that. Lights and sounds and bodies blend, inseparable in the heat.

Heavy clouds shroud my view out the window of the plane. Lights on the wing of the plane blink, trying to penetrate the fog. As usual, summer is dense and dark and heavy and happy and dangerous and dogged. I almost admire summer for its resoluteness.

I don’t trust summer. It seeps into everything. It stings. It simmers. It scorches.

In two-and-a-half weeks, I’ll leave Minnesota. I’ll come back to Iowa. Summer will seep into fall, its heat and humidity and happiness reduced to stress and school and schedules.

I don’t trust summer, but I’m not sure I’m ready to see it go. 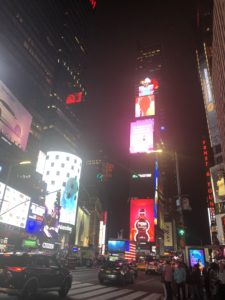 After a flight cancellation and a six-hour ride on a Greyhound bus from Ithaca to NYC, I unexpectedly ended up in Times Square.