I don’t see a lot of movies, maybe two or three a year. I rarely plan ahead to go to the movies, instead spontaneously scrunching my still-damp hair as I shuffle to my car on a Saturday night.

“Kedi” was the first movie I saw alone. It’s a Turkish documentary about the street cats of Istanbul. I saw it when I was trying to decide which law school to attend. The sound, screen and subtitles kept me occupied, restored me to a feeling human being as I reconnected with the cats I encountered in the same city, my favorite city in the world, a few years ago. 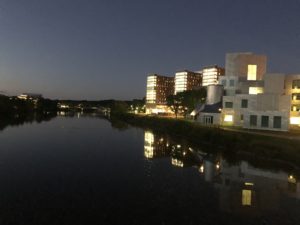 Last Saturday I saw “Crazy Rich Asians” by myself here in Iowa City. I had forgotten how heavy the silence is in law school, the way hours and hours of quiet reading sink into your soul. The sensory overload of going to a movie — the screen, the speakers, the inescapability of it all — comforts me, as if it’s possible to refill the silence, to pour sound and light and feeling right back into my emotionally drained spirit.

I sometimes joke that I was a person for a few years before I came to law school. I had a full-time job, a side gig at the state’s largest newspaper, volunteer commitments and hobbies. Sometimes I feel stripped of that personhood here. I am instead a machine who reads and studies and outlines and color-codes.

After I see a movie, I usually find myself watching endless interviews with cast members and listening to the soundtrack as I get ready in the morning. I saw “National Parks Adventure,” an IMAX documentary film by MacGillivray Freeman, probably seven times in the dome theater at the Science Center of Iowa, where I worked before law school. The soundtrack is absolutely beautiful and even makes me — certifiably not a nature girl — want to go outside.

I listen to it probably once a week, Woody Guthrie, James Bay, Brandi Carlile and others echoing through my apartment.

While I love all the songs, I think what I long for most of all is to be transported back to that environment in which I can’t think about anything else — where the sound and screen and story envelop me, where I can be a person with feelings I often characterize as “inconvenient” amid the stress of law school.

But feelings outside of anxiety and stress and “Oh shit what if I get cold called today I didn’t have time to brief that case” aren’t inconvenient, I have to constantly remind myself. Feelings can’t be inconvenient; they can only be human.

And spontaneously going to a movie solo is one of the best reminders of what it means to be a real, feeling human, I’d say.